This Time, It's Personal

I don't always like to talk about personal things here, beyond my occasional cranky mutterings about an overpriced scone.  Sometimes, though, I feel like I need to explain something about myself, without worrying about being interrupted.  More on that later.

So today I'd like to feature the wonderful world of my social anxiety disorder.  It's a bit tea-related, as too much caffeine ups the problem, and also taking tea is often a social activity.  I have other anxiety-related disorders, but this one screws up my life the most.

When I tell people who've known me more than five minutes that I have social anxiety, I'm usually met with an incredulous response.  Yes, I've held a job that requires interacting with humans for over a decade.  Yes, I do public speaking - I've read my own poems in front of strangers, I have speaking assignments in my congregation, and in a language that I can  just about pronounce at that.  I sing in front of others at karaoke with minimal shyness. I wear bright colors that could attract attention.  Occasionally I've shared writing works-in-progress at workshops and lived to tell the tale.  I can't be that badly off if I'm capable of all this?

So maybe I don't have the worst case of social anxiety.  But it's real, and it's painful, and it has messed up my life.

One way is my extreme difficulty in approaching others, particularly to ask for something.  This could be a stranger, a co-worker, a family member, even a best friend. I immediately anticipate rejection, and the thought that I may be seen as being a problem.  When I'm told "just ask", it's like being told to JUST jump off a cliff.  Sure.  That's fine. 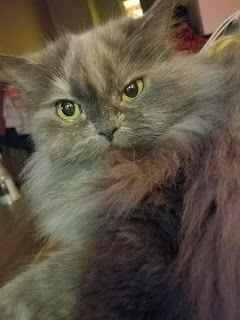 In my college Precalculus class, the final exam was a group project - I chose to do it on my own, and obviously failed the exam and the class because my mathematical abilities are not stellar.  But all I had to do was find a group and approach them.  They wouldn't mind, would they?  Then I had a flashback of being picked to be in a team in gym class during junior high school, hearing the entire group of girls exclaim "No!!!" as I went to join them, and that was that.  I've imprinted that moment in my life and stuck it onto another crucial moment, and that feeling never faded away.   Now if I need a ride, a travel companion, the bill at a restaurant, I freeze up and just hope someone offers.  On a good day, I can text someone with a request.  IF I've asked you for something recently, know that this was a big day for me.  If you said no, I've probably been set back and won't do it again.  And now I've made you feel guilty, and I'm angry at myself for doing that.  I've also lived through it, though, so maybe you've helped me after all.

Even more difficult than physically approaching someone is calling them.  Phone anxiety is pretty common nowadays, but knowing I'm not alone in this does not make it easier.  Since I was a kid I hated making phone calls, and leaving voicemails is only marginally better.  Making appointments is a nightmare for me: for years I kept going to a hair salon that I was not crazy about because I could make appointments online.  Even now I'd prefer going into the salon to make the appointment rather than phoning them.  (If a friend offers to make the calls for me, I feel ridiculous.)  Receiving calls is just as bad.  I keep my phone on silent or vibrate, and often feel a cold sweat come upon me, even if it's a familiar number.   Websites like Seamless have been a miracle for me - I get to order takeout with almost no human interaction?  Wonderful! - unless the restaurant has run out of my order, and phones me to ask for alternatives.  The horror!

But wait?  Don't I work at a place where I have to call people, and take calls, and cover reception?  Yes.  There's more than one reason I feel sick every morning.  Sometimes I end up shooting the breeze and feeling that maybe it's not such a bad thing, and other times I stammer and say 'like' every other word, and am in tears by the end of the call (or close, because I'm also terrified of crying in public, so I get a splitting headache.)  I type at a quick pace, but if someone stands over me while I type I become Typo Woman.  When I was a travel agent (back in the early days of internet booking), I would bristle if a client tried to look a the screen I was working on to find a good rate.  That was definitely not an ideal job for me.  Ideally I should be working in a more quiet position, like data entry, or writer/reader, or with animals (because I will talk to your dog more readily than yourself), but I also need to support myself as an adult, so I power on and make myself sick.  Then - oh no! - I have to call in sick.  All this is not even going into the horrors of job searching.

Life needs to be lived.  We are all social creatures.  In my opinion, I'm not antisocial (though a bit grumpy).  I want companionship like everyone else.  I love a good conversation over a cup of tea, or a crazy long walk, or in a bookshop.  People are fascinating, and I want to get to know (some) people.  I didn't choose to be single.  Unfortunately, we live in a world where a lot of interaction  and getting to know someone requires being in a crowd.  Movies and plays aren't too bad, because most theaters have decent sized seats, and I'm in a dark room where I can't see others (forget opening night in the MCU universe, though).  Concerts are less possible for me as years go by, especially general admission.  Hanging out in big groups, or any crowded, loud event is something I avoid if I can.  It's not always possible.

Walking into a room full of people, even full of people I know, is daunting.  I explained to someone once that often I don't see the smiles on their faces or even sense caring, all I see is a distortion.  The closest thing I can compare it to is here.  Did you watch it?  The whole thing? Creepy, right?  Willkommen to my life!  It helps if I arrive early, when wherever I'm going is still emptyish, so I try.  I also look for aisle seats, so I can bolt if I need to.  (The only exception to this is during train travel, as looking out a window at fields and horses is soothing.  Horsies!)

The worst situation is being called out on my discomfort.  If I go to a party and want to dance, I will.  I'm not a good dancer, but I'll get to the dance floor, and I tend to feel secure in the fact that nobody's really watching me - that is the one safety of a crowd.  But if someone calls to me to join the dance, and brings attention to the fact that I'm sitting, I'm done.  I'm also highly sensitive, so I can't bear being squashed next to others with little movement, hearing their loud chewing noises and picking up their breath with my nearly supernatural sense of smell.  I don't know if that is a part of social anxiety, but it ain't helping.  When someone calls someone 'sensitive', it's usually a judgment, and social anxiety sufferers are afraid of being judged.  Yay.

Only large groups?  Well, this can also happen with a few people, but another problem is that I'm also soft-spoken.  Like I said before, though, I like conversations, but I don't like to not be heard when I'm speaking.  If I'm interrupted, I lose focus and check out mentally. But even if was able to be heard, you can be sure that later on I'll be mulling over everything I said, editing and recoiling in horror about some turn of phrase or personal revelation.

I know my fears are mostly irrational, and I know that some people "have it worse" - not that that makes me feel better, now I have guilt atop the anxiety! I don't know if anyone will actually read this through - particularly those who I've tried to explain this to, but couldn't get the words out properly, but this is not something I take lightly.  I can laugh off a decent amount of issues, but not this.  I won't snap out of it, and I haven't gotten better just because sometimes I am Highly Functioning.  Some have been helped by Cognitive Behavioral Therapy - maybe it would help me too, if I could make an appointment...

Hi, I wanted to let you know that I read your post, and you are not alone! I have an anxiety disorder, and though it’s different to yours I sympathise completely. And no, knowing other people have anxiety too does not really help at all! But at least you know some people understand how you feel. I had CBT and it was a bit of a waste of time, I find personally there’s a lot of trial and error in finding a therapy that works, but that in itself is a stressful endeavour.

Anyhoo, I just wanted to let you know that I’d read your post and it is difficult but people do understand :). @BonneMillie from Twitter