Go With No Flo 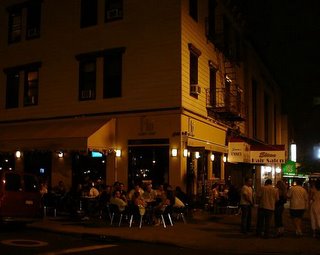 (I know the picture is a little bit dark...it's the only one I have.)

I walk up and down 30th Avenue quite often. Most of the time, when I pass Flo, the new cafe on 38th Street, I see people smoking in the window. I know that in the summer there is outside seating, and during the winter they cover this portion in some plastic enclosure to keep the customers coming. Even though this area tends to be the "smoking section", it still annoys me. It is indoors during this time, hence it should be no smoking! Personally, it wouldn't bother me too much if it wasn't for the plethora of places on 30th Avenue, and also Broadway, where people get away with smoking. And the smokers are usually young people, who should know better. It's not the 1930s, when all the hip happening people were seen languidly puffing away at cigarettes...not to mention the fact that many of these folks died of cancer (does anyone remember the Yul Brynner commerical in the 80s?)

Anyway, it's really not cool, in fact it looks stupid, and they are cutting into my personal enjoyment. I put up with a lot in the past, for instance interning in a place where everyone smoked in the office. Within three months I was asthmatic (I am not kidding), my face was riddled with acne, and my hair was disgusting. I even dealt with waiting in the doctor's office when I was eight with horrendous strep throat, while someone smoked in the waiting room...how about trying to drink a vanilla milk shake in a diner and not enjoying the taste because someone else was savoring their cigarette?! What about karaoke night at Chelsea Piers, where my mediocre singing sank into hoarse cackling? Obviously I was relieved when New York restaurants and bars came under the no smoking laws.

I feel bad that some people are struggling with their addiction. I work with perfectly nice people who have to step outside frequently for their smoking breaks. Still, I am extremely relieved that I am rarely exposed to smoke, and I suppose that I'll just have to boycott those spots in Astoria or otherwise where people have no concern for the health or sanity of their fellow humans. Take a deep breath.....
Posted by Catherine at 2:09 PM

you go girl...whine all you want. I share your sentiments!

actually the smell of smoke doesn't bother me too much (unless I'm eating...it does take away from the flavor). but Flo is just, not that great a place anyway. I'll never forget being with someone who ordered a turkey sandwich from them and basically got wonderbread and some keyfood lunchmeat. kind of deceptive...