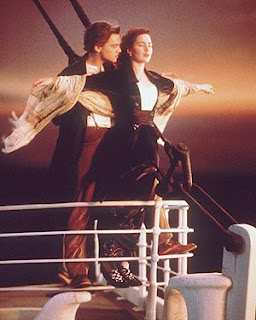 Time is a very strange thing. Some events in my life seem like centuries ago, and it could have been something that happened this very year. Other memories seem frighteningly recent...you know the phrase, "it seems like just yesterday"...but it really occurred a while back.

I had that odd feeling when I realized it's been ten years since I first saw "Titanic" in the theatre. What? How can that be? I remember exactly how I felt, and how worked up I got every time I heard the Celine Dion song on the radio. I even bought a "Heart of the Ocean" replica necklace. I ended up watching the movie three more times in the theatre before holding on for the video release.

Hang on a minute. The video release. That's right. I bought the VHS version. I bought it in the Borders in the World Trade Center. I was still a travel agent.

As for the theatre, the one on 30th Avenue and Steinway Street? That hasn't been there in quite some time. Cherann was there the first time I saw that movie, and she hasn't been in New York for over five years. My father came with me to the third or fourth theatre visit, and he's been gone over a year. Marie and I (and others who would kill me if I mentioned their names) used my brand new camcorder to reenact scenes from the movie. I haven't used that camcorder in over four years. Huh.

I had the same cold feeling when I heard the Spice Girls were reuniting. Wow. They've really, um, grown up. (Have I?) They have kids of their own.

So I guess it doesn't really seem like yesterday, when I start listing all the changes of the past decade. Still, though now I roll my eyes at my intense fascination at that time for all things Titanic (I don't get emotional over that song anymore, though I still quite admire both Kate Winslet and Leonardo DiCaprio for their acting skills), I can't say I'm ashamed. I was one of many, and it's not like I was drooling over the boy bands or anything.

Memories are fun when you don't obsess over them, and I'll never let go....(there, I said it.)
Posted by Catherine at 2:22 PM

Yeah, things change so fast (esp. recently). That movie was so emotional to me at the time. Ten years. Wow. I think with my emotional state right now, if I was to watch Titanic, I'd start bawling like I did w/CherAnn way back when. But anyway...as per Marie's blog, there's "Never a Dull Moment", huh?

Cathy
You are so right about time flying by so fast. Today is my 31st wedding anniversary. OUCH. Where did the time go. My kids are all grown up (wish they acted that way) and I am feeling old. Hope everything is going your way. Sandy

Wow, 31 years! I actually had a 31 year milestone myself this year.

Congratulations - don't worry, you don't look the way you feel.

I haven't heard the Spice Girl's song yet...and I really could care less. But we did have fun making those replica videos. Oops! You weren't talking about THOSE videos, now where you? Hee hee hee.