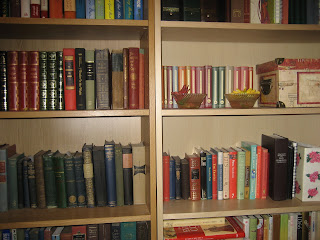 The Duchess of Bloomsbury Street by Helene Hanff: I mentioned this one back in January, but it's worth a shout-out once again. I just loved the sequel to 84, Charing Cross Road, and could feel myself almost accompanying Hanff on her first visit to England (a few years before I was born, so physically impossible.) I've actually read this one twice this year - it's not long.

Katherine, by Anya Seton: Historical novel based on the life of Katherine Swynford, who later married John of Gaunt and ancestress of a number of Kings and Queens of England. Sometimes I found it a tad melodramatic, but still a fun display of the 14th Century.

Liquid Jade, by Beatrice Hohenegger: One of those tea-is-wonderful-but-we-got-it-at-the-price-of-millions-of-suffering-people-in-the-past themed tomes. Though I felt guilty in intervals, it also helped me to really appreciate what it takes for me to have a good cup of tea, and I aim to truly savor it.

Nice Cup of Tea and a Sit Down, by Nicey and Wifey: An in-depth study of tea break enjoyment, down to the mug/cup and biscuits. Probably the most fitting title of a book I've seen.

Luncheon of the Boating Party by Susan Vreeland: A novel based on the making of a Renoir painting? Fabulous! Perfect early summer reading.

First Among Sequels by Jasper Fforde: Once again, a real highlight of the summer. It's truly the only reason I look forward to July anymore. It was a little strange to read about Thursday Next's adventures in this decade, but still something I shall return to again and again without getting tired of it.

Down and Out in Paris and London by George Orwell: You have to be in the mood to read about poverty and the hobo life to get into this. Still, it's my first Orwell since Animal Farm in High School - it seems I forgot how well he writes. Maybe I'll make a move on his essays.

Nefertiti by Michelle Moran: I've never really been into Egypt and its history, beyond Exodus and that Cleopatra novel I read a few years back. Nefertiti actually moved me to visit the Egyptian section of the Met. I never knew about the upheavals of religion during this particular time period (just before Tutankhamen): it seems Nefetiti's husband wanted to introduce a monotheistic belief system. Nefertiti's sister is the narrator in this novel, who is portrayed as an herbal expert who just wants to live a simple, non-ambitious life but can't quite get there.

Tipperary by Frank Delaney: I read Ireland by the same author over a year ago, and I liked his storytelling, so I picked up this one as soon as I could get a hold of it. For some reason the story reminded me a little of Forrest Gump - a guy who is a bit simple in some ways who meets well-known people of his time pretty much by accident each instance, and retains a rather frustrated love for a woman for a long, long time. Still, I love learning about recent Irish history through the magic of fiction! It's also cool how the narrator changes -from Charles O'Brien near the turn of the last century, to the historian who finds the story and realizes as it goes on that he's somehow connected to it.

There's other very good ones, but I'm really interested in getting on with 2008.
Posted by Catherine at 9:00 PM

My, you average more than a book a week! I like the picture of your library...delicious. Can you believe I still haven't read the new Fforde book? I have it out from the library again...hopefully this time I'll actually get around to reading it. Right now, besides the new JW yearbook, I'm reading a novel called The Saffron Kitchen, by Yasmin Crowther, set in London and Iran. It's an absorbing read and is making me want Iranian food (although it's not about food, despite the word kitchen in its title). The last book I read was a work of non-fiction called Kabul Beauty School. That made me want Afghan food. What's with books making me hungry?

Cathy
You are a book worm!!!!!!!!! I like to read about 10-11 at night. Helps me get to sleep. Still haven't got the Jasper Fforde book yet. I am going to try a used book store we have in the area. I bet you would love it. It is called Catnap Used Books. Keep readin

They changed this blog now I can't sign under my name only anonymous. Do you know why?

This time it posted under your name. I have no idea why. I'm still rubbish at this newfangled computer stuff.

"but still something I shall return to again and again without getting tired of it."

-Gata On "First Among Sequels"

YEAH, WHENEVER YOU GET IT BACK! I GOT STUCK IN THE MIDDLE READING IT!