My eyes are burning...Book Review 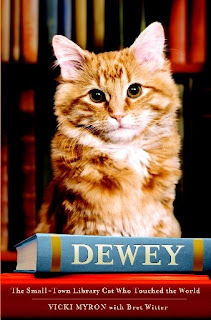 I've said it before: I am NOT a crier. Unless there is a serious death in the family, including the cats, I rarely shed a tear. If I watch one of those sad chick-flicks, I might tear up a little, but it doesn't get further than that. So imagine my surprise when I found myself weeping at the end of Dewey. I was hysterical. That's really unlike me. So now I can't say whether I'm about to recommend this book or scare people away.

Quite a few cat lovers have heard of Dewey, the fluffy orange cat that was found as a kitten in a book slot and kept on as the library's full time representative. Vicki Myron's story, about his life in the library, as well as hers both as a library director, a cancer survivor, as well as victim of various other tragedies, really does tug at the heart, even my normally lukewarm one. On top of these two life stories with their ups and downs, it's also the story of Spencer, a small town in Iowa. I know nothing about Iowa, and I only know a little more now. Still, Spencer sounds like a nice place, where people work together during hard times to get through. Plus they grow a lot of corn, and I love corn. I don't care how simple that sounds, corn is great!

Anyway, it was just fine reading about the amazing Dewey, and all the love he showed the library's visitors, and how much he was loved. It was something how his fame spread wide during his lifetime, as far as Japan. I guess if you can't handle the sadness of a cat dying, skip the last two chapters, and you'll be fine. Personally, I thought I'd be fine, and next thing I knew I was gasping like a little kid after a tantrum. Sheesh. (Sniff!)

What got me was probably thinking about my own lovely orange cat, Cinnamon, who died the same year as Dewey. He may not have befriended a whole town, but he did breathe new life into our home after a really bad year. Though I'd known other decent cats before, it was he that turned me into the cat person I am now, for better or worse. So by the time I got to the part in the book where Dewey had to be put down, it was too close to home.

I may need to stay away from the animal books for a while. I have to finish The Labrador Pact first. Uh oh.
Posted by Catherine at 10:32 AM

Awh...sounds like a sad ending...would probably make me tear up too. I've never had one of my cats die yet, first one ran away, second one given away and third one...well, still alive, kicking and mean as ever.

That kitty looks like Itchy. Maybe I will give that book a try. Need a different theme. Snow last night in upstate NY. 5-10 inches. It is October isn't it?

Yeah, I think I'll skip Dewey. Unless I'm in the mood for a good cry. Animal sadness really gets me going.
I'm not surprised you cried, though, as The Lion King sets you off. Anything that's cat emotional...

That would probably set me off too. I've always had a hard time reading animal books with sad endings--although at least it looks as if Dewey had a happy life at the library.