I try to come up with something new every time I post here, though at times I fall back on nostalgia. In recent weeks there have been a few decent changes, so I'll briefly run through them.

As most people who know me well know very well, I am not a fan of changes. I don't mind so much trying new things - especially when it comes to food. I had my first macaron recently, which was amazing. From what I've heard, New York's macaron offerings are not nearly as good as the ones in Paris. This blows my mind. I finally want to return to Paris. Anyone want to buy me a ticket?

But trying a new cookie-type treat (which go well with Earl Grey, by the way) is not really a change. Neither is visiting the new branch of the NY Public Library. That is a good thing as it's very close to my job, so it'll be easy to drop off due books. It's not a large branch, especially compared to the Mid-Manhattan Library. It's just a small branch which so far contains pristine, brand new library books. I almost took a book out that I own already, it was so new looking. The only problem I can see is that one of the women at the checkout is pretty rude. Both times I went there with my sister she was snappy with her for not stepping up to the table at lightning speed. It's not like the line is clearly marked, either. I just hope the woman is going through some stuff and will be pleasant in the future.

I have a new ipod nano as well. It was a Thank You gift. How do I thank the givers for the thank you gift? Well, thank you!

All these things are simply new, but not massive changes for me. I knew I needed something different in my life, but again, I don't do well with change. Surprisingly, the one I made this week was easier than I thought. I got my hair dyed red.

For a few years I've toyed with the idea. I tried on a red wig once, and thought it looked rather flattering. Still, I didn't like the idea of dyeing my hair. I've had a sort of pride thing going about keeping it natural. It's like Queen's albums in the 1970's. The liner notes made a point of saying "No Synthesizers!" on every album. Then the 80s rolled around, and suddenly not only were they using synthesizers, but detailing which ones. It's like they just decided "why not?", and Freddie grew a mustache on top of it all.

So my personal mantra had been "real hair color!", and I figured the only way I would dye my hair is if I went entirely grey. Well, that hasn't happened yet, aside from the occasional strand of horror. But recently I did let Marie color the underside of my hair auburn, which basically showed only as a little peek unless I put my hair up. Still, I couldn't stop holding up the darker bits to my face, and quite liking it. After over a month's deliberation, I made an appointment with a hair stylist, who Daphne recommended enthusiastically. I thought her hair always turned out great, so I wasn't afraid. When the time came, I was much calmer than I thought. Of course whenever someone touches my hair I get relaxed.

The results were stunning. It was the exact color I'd wanted, and I liked it better than my natural color. Ha, they say blondes can't stop looking in mirrors - you should have seen me this week!

The only thing that took getting used to was everyone's reaction. It was almost universally complimented, but I couldn't believe just how excited everyone was. Everyone, from coworkers to friends, to people I barely talk to normally on the street. Some people didn't recognize me, or thought I was my sister Pam. (I also kind of look like my mom when she was younger, but she was pretty enough back then so I'm okay with that.) I've also been compared to comic book heroines/villains and a sea dwelling Disney princess. Now I'm satiated with the attention, but I suppose it's better than a meh reaction or none at all.

My favorite thing about the hair? It kind of looks like tea. Black tea, I mean. As long as my skin doesn't resemble a scone.

So I guess change can be good. I won't be getting tattoos anytime soon, though. That was a JOKE, guys! I'm never gonna do it! 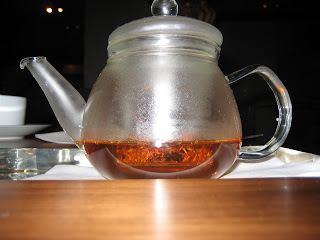 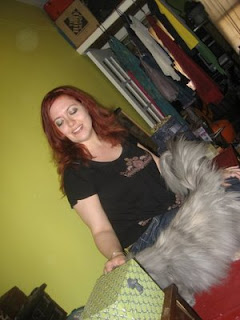 Nice picture of you in your new 'do. A new hairdo can be very refreshing.
Only you would compare your hair to tea ;) But I can see the resemblance.

oh my!!!!!!! I didn't even recognize you. I love it. I am a red head too but my last dye job turned out on the purple side. I think it was because of the meds I am on. Anyway it looks good. Everyone likes it. Just a little too dark for me. Thanks for the card Cathy. Can't wait to see you all. Sandy

Hey, for a moment I thought you were wearing a fur skirt! Nice pic, like your hair like that.

Although I am resistant to major life changes, I do enjoy all the new little changes every now and then that can make life a bit more enjoyable. :)

I love your hair by the way...it really makes you spicy!