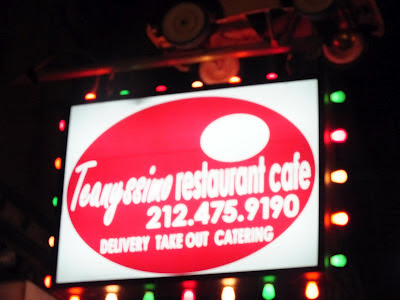 I apologize for this rather blurry picture - I'm still struggling with evening mode. 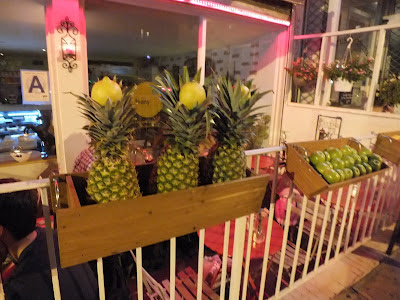 
About a year ago, I had one of the worst restaurant experiences of my life.  Teany was going down the drain, and I didn't think I"d ever return.  In fact, I thought the place would close down for good.  Really, for good, because it was bad, so bad.

Still, I couldn't help being curious as to Teany's fate, so from time to time I'd check reviews on Yelp or other blogs.  For a while the negativity centered around those carrying online coupons.  Teany had new management, and they didn't see fit to honor these coupons.  But as time wore on, the negativity faded and I'd even read the occasional glowing review.  Wow, I thought.  Could Teany be on the mend?

Then I got sick in July and switched to a mainly vegetarian diet.  Nowadays restaurants are pretty sensitive to people with dietary issues, so I could still visit most of my usual favorite places.  Teany kept popping into my mind, though, since I knew they were altogether meat-free, and quite a few items on their menu were vegan.  So one evening after work I thought, hey, let's give it one more try.

Well, I'm glad I did.  When I first got to Teany I noticed the new sign, which calls the place 'Teanyssimo'.  I was a little wary, since I don't equate tea with Italian food, but it's an exuberant expression and wouldn't deter me from pressing onward.  There were a number of patrons sitting outside, and when I got there I had the pick of seats inside, since nobody else was there.    I felt like I was at home - seriously, I did, because there's a bit of upholstery issues with some of the furniture, though not cat-related, and not enough to be a turnoff.   So I settled in. The girl working there was perfectly friendly and helpful, without being fussy.  That was already an improvement.

I gave Teany my ultimate test: I ordered Afternoon Tea.  Last time I'd tried that I was disappointed (they'd stopped serving it for the day although it was supposed to be an all-day thing.)  Now, however, not only did they have it, but at least two other patrons ordered it as well - including a party of about four who came inside.

Afternoon Tea was served thus: first I got the tea (iced rooibos, which was re-iced later on,) and a coconut almond scone.  The scone was warm and delicious, and served with cream that was close to butter and marmalade.  Already we're on the right track.  The sandwiches were next, presented in a three tiered tray with greens in the middle tier.  I had 'turkey' apple brie on a roll-type bread (not too hard) and a 'ham' and melted cheese that was superb.  They weren't dainty, but not awkward either.  The dessert was amazing - it was a vegan chocolate peanut butter cake.  I couldn't finish it, but that's only because I can't seem to finish anything rich these days.  And then the best part: the bill: it's still one of the lowest prices afternoon teas in New York!
As for ambiance, the inside was cooled by fan which was fine for the weather.  The music was just okay - it sounded like they were playing 'elevator music' on Pandora.  I prefer this to loud and obnoxious, though.

It was all in all a good experience, so I think I shall return.  One more time should seal the deal.  If it's just as good or better I'll give it my full blessing.  If this time was nice but a fluke I'll forget about it.  I think that's fair.

Posted by Catherine at 1:31 PM

interesting! I haven't been to Teany in years, because of a few bad experiences. I'll have to give it a re-visit soon!