Head in the Clouds

There's certain places that for me take on a shorthand of sorts.  When I say I'm going to The Park, it's Central Park.  The Brats are my kitties, The Afternoon Tea is Tea and Sympathy, and The Doctor is a Time Lord.  You can substitute "My" for "The", I suppose.  Well, "The" "My" Museum is the Met, or the Metropolitan Museum of Art.  It's my first museum and it's the one I've been to the most.  I believe I've covered every square inch of the place, with the exception of Staff-only rooms and Men's rooms.  Yet in all the years since my very first visit (almost 30, which is scary) I'd never been to the roof.  This had to be rectified.

On a recent Friday I got out of work early and took a walk through The Park, ending up at the Met around 4:30 I guess.  To get to the roof, I went through the Greek and Roman section, then right through the creepy 'Americas' area, to the designated elevator.  It was my third try: one week they were closing up, the next time it was a rainy day; but this time it was nice out.

Though not everyone was dressed up, I felt like I was entering a party.  Drinks are served on the roof, at ridiculous cost of course, and people gather to relax over excellent views of the Park and the City (another 'The': referring to Manhattan).  There's a special interactive exhibit called 'Cloud City' that's on til' November.  It's free, but tickets are limited, so mine were for entrance in another two hours.  I didn't mind waiting: I got to see the new American Wing, which was worth it, and then I had a cup of tea in the cafeteria to pass the time.  It was Tazo Calm, in case you were wondering.

When it was my time to go inside the exhibit, I had to put my things away in provided lockers, so I didn't have my camera.  It was okay, certainly more good views, but I was a bit nervous because once you climb up to the top, the floors are see-through and I was wearing a skirt.  Yipes!

If you feel like waiting, it's not bad, but you're fine just going to the rooftop itself. 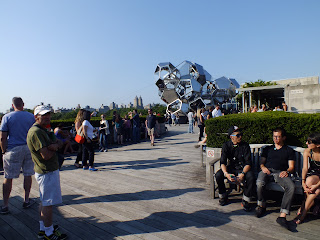 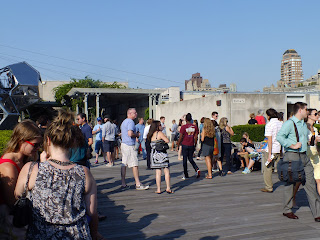 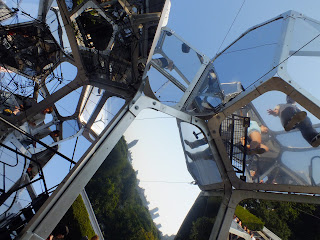 Looks kind of like bug-eyes.  See what I mean about wearing a skirt? 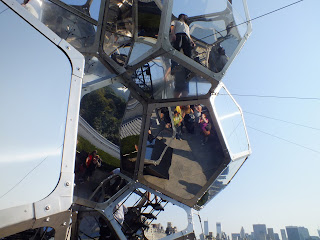 That's me on the far right with a purple top, taking a pic while I still could. 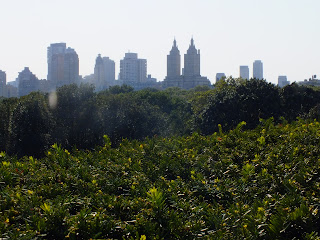 The Park
Posted by Catherine at 12:00 PM