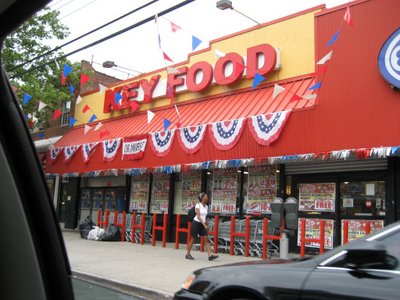 Here are the good things about my hometown, Astoria, Queens: it's a quick commute to Midtown Manhattan, there are a variety of restaurants, um.............................. but it's not exactly the most gorgeous area. Most blocks are full of apartment buildings and houses plopped down without any thought to its eyesoreability. Some blocks are full of the same six family railroad flats, and that's the closest one gets to design in Astoria. My complaint has always been, and still is, the lack of bookstores. There was one just two blocks from my home for a year or so, but it was really a hole in the wall, no character, no staying power. I remember over a decade ago there was a lovely bookstore near the Ditmars Blvd station on the "N" line. 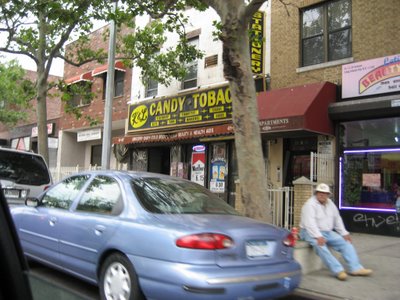 When I discovered this place I thought I was dreaming. Sure, it wasn't that close too home: Astoria is big, and this was 2 train stops away. Still, I was glad it was there, and looked forward to visiting many times. Sadly, it's gone now. There is one more place that sells books on Broadway, but it is another poor excuse to me. There's not much going on. It's just too easy to take the subway downtown and wander around Strand if I'm in the mood.

Growing up, we had the library. It's still there, and not too bad, though I get the feeling when I'm there that I'm back in PS 70 with the vengeful Ms. Orol. Either that or I'm in a homeless shelter.

There are worse places to live, and like I said, you can eat really well in Astoria. But for crazy book people like me, in the words of the Bard: "I can't get no satisfaction..." (Well, Mick Jagger's almost as quotable as Shakespeare.) 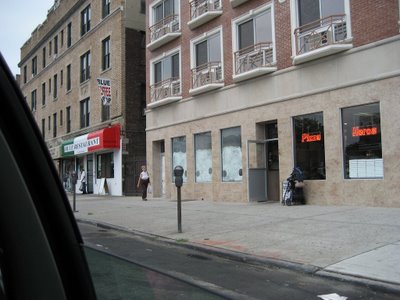 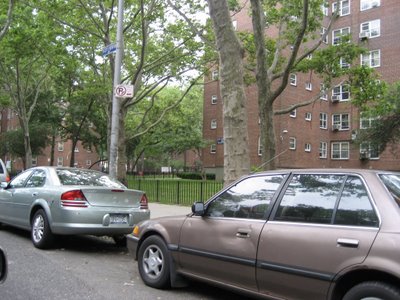 Posted by Catherine at 9:31 PM

There is absolutely no character in these pics. Though on 12th street off 27th avenue there are some manison that are noteworthy. And as I have said there will be a time when my home is on the hill top overlooking the river.
They are adding some new houses with alittle more sytle.
Just looking at your shots makes me feel disconnected. Alas theres always brookyln...soeaking of which
have u heard of a place called Two for the Pot ? its 200 clinton street.

nice montage of the hood. Astoria really isn't half bad. and it's starting to get a better rep b/c of all the Manhattanites moving in, so who knows maybe we'll get a B&N. :)

I'm just starting to wonder about the QOL in this city, generally. I spent the weekend upstate and came back down to asthma attacks and allergies. I think we'll all eventually have to make our way to the country anyway, though Astoria's still home to me.

Yes, I can make a place look real dismal - though I'm sure if anyone looks hard enough there is beauty in Astoria...we just need to look in the mirror...ah ha ha!

Yes, I have heard of Two For the Pot...must try!

Gata, you must post pictures of the GOOD aspects of Astoria, the cafes and restaurants, Cavo lounge (even though I've never been - ha), Steinway street....Astoria Park...

Okay, I'm a brat. But ya already knew that.

I think the pics of my block engulfed in snow February 2006 was rather fetching.

Don't worry, I'll do a positive Astoria post sometime soon. The humidity is putting everything in a glum light.

And yes, I know the projects are Woodside.

Ironically --walking on Steinway by the Arab sector I felt as if I were in another territory. Then further down the block there was an exhausted Greek man sitting while his wife poured cold water on his head. An Indian woman with her children strolled past me and I could not help but love Astoria for its diversity. I would think that living elsewhere where the ethnic factor was reduced to a singular culture, would make me feel uncomfortable. Astoria rules for this.