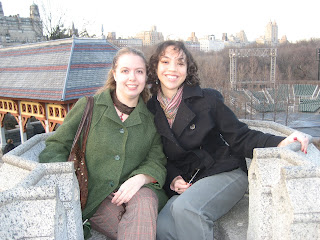 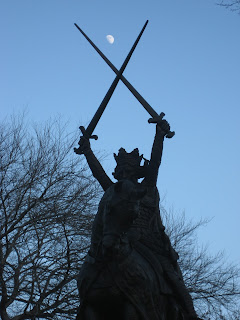 You know how easy it is to take your home city for granted? Actually, I've been known for not doing that. As most of my life I've been too broke to travel (not that that's always stopped me), I've tried to make the most of my situation and enjoy New York for what it has to offer. Though it's crowded and full of scaffolding, if you endeavor to see it as often as possible through the eyes of a tourist, you will find yourself getting excited once again. On Friday a few of us walked through Central Park with a girl from out of town. Though it was slightly colder than I'd like, it's infinitely better than too hot.
We walked from 59th and Lex, through the park up to 82nd Street. Then of course the old favorite, the Met, which if my feet hold out I can spend hours in. The only downfall was that there were too many people, especially in the Glitter and Gloom exhibit (rather depressing paintings and drawings from post WWI Germany). Still, it's one of those places I don't tire of. I have yet to do afternoon tea there, though, which shows one never runs out of things to do in New York. 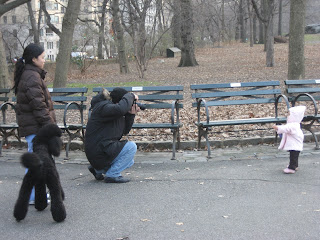 You can mistake the girl in the picture (w/ the dog) for ME! Ha ha ha. Yes, NY is lovely. I'm coming back this month for a weekend - lookout!

Wow, seems you can't get enough of NY...