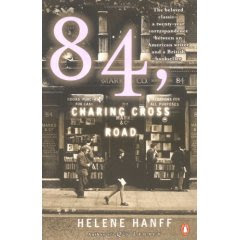 The movie was on last night - I'd seen it for the first time last spring, at which point I also read the book (usually I do it the other way around, but there's always the exception). It became an instant classic for me - both book and movie - a feat that is rarely reached for me, with the exception of some Jane Austen novels and Anne of Green Gables. I'm not sure I listed it among the 51 books I finished last year.
Helene Hanff was a writer living in New York. In the movie she is portrayed by Anne Bancroft, who seduces the reader with her smoker's voice, both rhapsodising about the texture of British books and ranting about slow deliveries.

Hanff was a voracious reader, possibly even more so than I because in the age of little to no television and before the Internet, reading was it. She may have lived in Manhattan, but she was wary of the word "antiquarian" as she was certainly not rich. Her love for English literature led her to an advertisement for Marks & Co., a used book store on 84 Charing Cross Road, London. Charing Cross Road, even now, is well known as a book lover's haven, and conveniently located in the theater district. It's also bordered by Trafalgar Square. My first London book purchase was on this road, though I think it was in a chain bookseller. (It was a Queen biography - the band, not the royal one...that realm of interest came to me a few years later.)
Moving on... Helene (now we're on a first name basis) established a relationship with Frank Doel at Marks & Co., who found British books rarely sold in America - at reasonable prices anyway. From the late 1940's to the late 60's she requested mostly non-fiction - her tastes were a bit different from mine as she rarely read fiction.
What I loved is that from such a long distance, she could rant all she wanted about slow deliveries, and receive nothing but mild-mannered replies from Frank Doel. So when she heard about the post-war food rations in England, she found a company in Denmark that sent all kinds of meat and other limited products to London and sent these as gifts to the employees of Marks & Co. Eventually she began to receive notes from the other employees, as well as Doel's wife Nora.
Of course Helene began to consider a visit to England. When I first saw the movie I kept wondering what was taking her so long? I know she wasn't rich, but neither am I and I've been there a number of times. But we are talking about over fifty years ago. People didn't just jump on planes when the mood struck them. She did, though, finally plan to come over for the Queen's coronation, but then she found out she need root canal work, which took a large bite out of her funds. (Groan!) I kind of related to this, because my root canal cost me $1000, and this was with dental insurance. So she continued her written correspondence instead. In fact, she didn't make it to England until 1971, when both Frank Doel and Marks & Co. were gone.
I loved the movie and the book in different ways. I wanted to live in Helene's apartment in the movie, sans the smoke. Like me, she was happiest surrounded by books, though she was not afraid of throwing out books when she ran out of room. But the book offered further details not mentioned in the movie, so I can't put one over the other.
Shortly after buying the book I also bought The Duchess of Bloomsbury Street. After last summer, I never even had a chance to open the book, I just knew it was written by Helene Hanff. So when I finally looked into it this week, I was surprised to realize this was in fact the sequel to 84 Charing Cross Road. It's more in the form of a travel diary - her long-awaited visit to London. So far, so good.
Don't look for a bookshop on 84 Charing Cross Road now - last time I checked, it's a wine bar. Things have certainly changed since Helene Hanff and Frank Doel kept in touch. Now if someone in New York wants a book from England, they can simply visit Amazon's UK site. Hardly anyone writes letters anymore, so I don't think the book would have been written if Helene was born sixty years later. I wonder if she would have kept an online journal.
Posted by Catherine at 10:02 AM

I had absolutely the same reaction to the movie that you did. I remember thinking that Helene's apartment was just perfect. Haven't read the book, though. Next time I run across a copy, I'll snap it up.
Your blogs are great. All of them. I can't decide which I like best.

Marie, hope you get a chance to see the last half of the movie (hopefully without me reciting the lines verbatum, sorry.)