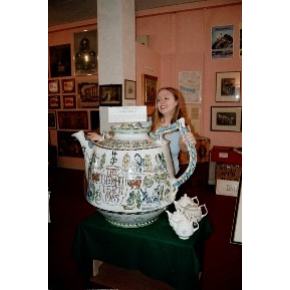 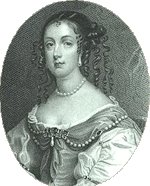 A friend of mine just brought back for me from Harney & Sons their Queen Catherine blend. It's actually one of my favorite black tea blends, very light, stands on its own. Egotistically I love the name of the blend, though of course it wasn't actually named after me. In fact, most people don't know who Queen Catherine was (though thankfully, it's not one of the three married to Henry VIII.)

Catherine of Braganza was in fact Portuguese royalty, and later married to Charles II of England. As a queen she may have been viewed as a failure for not providing any heirs, well, who can blame her? Her husband was far too busy with his mistresses, including famous actresses of the time. Charles II seemed to be kind to her in every other way, and she certainly outlived him by many years, despite being Catholic during a very anti-Catholic time in England. Though she was a quiet woman, she was also strong when she needed to be, and known for her kind and forgiving nature. Sounds like a tea lover to me!

Tea was not widely partaken of during this time in England - it was enjoyed more among the Dutch and Portuguese. Catherine was a tea drinker and helped make this practice popular in the English court, which gradually spread to the rest of the realm - and now people view tea as a "British" practice more so than any other country in Europe (though Ireland and Turkey may have more tea drinkers per capita).

The picture of me next to the oversize teapot was taken in the Bramah Tea and Coffee Museum. Catherine's mug is painted on there along with other tea related pictures. Mr. Bramah happened to be there that day, and besides offering me a job (should have taken it, dang it!), he also enjoyed relating to us the history of tea in England. He linked tea drinking to the overall improved health in England. After all, the last major outbreak of the Plague took place during Charles II's reign. The boiling water for tea (and coffee) probably had a lot to do with this too. Of course, this is all speculation somewhat.

More Stuart Dynasty trivia: Remember in history class when we learned that New York was named after the Duke of York? He was Charles' brother and heir to the throne, James II (though his reign was not too successful). And when New Yorkers paid tribute to their monarch by naming boroughs after them - Kings and Queens County, guess who was the queen? Yes, it was Catherine.

Though I'm not sure Queen Catherine and I would have gotten along (her dowry to Charles was Bombay and she had no issues with the slave trade), perhaps we could have ironed our differences with a nice cup of tea.
Posted by Catherine at 10:19 PM

thank you for the interesting history lesson. If only 'issues' could be settled over a cup of tea...rather then an imfamous tea party.
U look like Alice next to that tea cup.

Nice anecdotes...as usual, your style of writing is superb!
Nice to learn a little more about another Tea Queen ;)

we saw that tea and I was like "GATA!" good to know you tried it before and actually like it. it would have been a downer if the tea tasted awful--even with such an apt name.

If it wasn't so good it would have been Miss Braganza -blah!

duh, i just got what 'miss braganza-ah' means. just goes to show how foggy my brain has been lately.