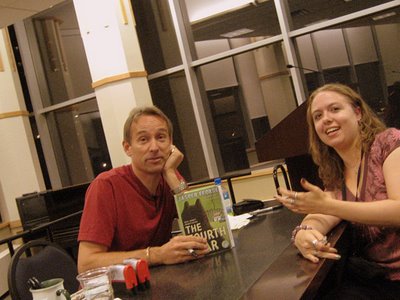 I truly enjoyed attending the Jasper Fforde book signing at the Lincoln Square Barnes and Noble on Monday. As he's my favorite living writer, I was maybe a little too excited, but I managed not to giggle too much.
He gave a talk that was about an hour long, followed by Q & A (I couldn't come up with a good question, narrowing it down to one is never good for me). I have to say, he's as funny in front of an audience as he is in the books. He told jokes, and shared his publishing adventures. 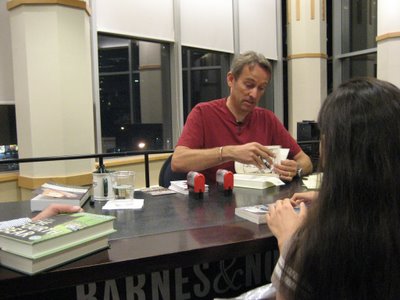 He's really enthusiastic about his work, and not at all reserved. A friend of mine used to gush about the British Humor (or should I say Humour) like it was the end-all in funny. Fforde's got that kind of wit, not overly dry, but that way with words and twisting them around that is utterly enjoyable (and makes me say, why can't I come up with things like that?)

The only thing I could think of saying to him when it was my turn was that I loved that he never got a degree (I said college, but in England it's university) and yet still comes up with this kind of writing, or something to that effect, and he said, "yeah, that's all rubbish anyway," I think he meant the degrees. His brothers both have doctorates, but who has posterity? I'm not knocking those with degrees, just saying it is possible to make it as a writer without being lettered. In fact, it looks like that's what actually helped him along - otherwise, he may have felt tied down by the need to have a specific genre. When he didn't need to write for other people, things turned out as it should have - the what if's and all that.

The guy who took our picture together did not press hard enough on the button of my digital camera, so it took three tries. I said to Fforde that maybe he's just not photogenic (though in greater likelihood that would be me) and he responded by saying maybe he's Hades (the diabolical character in the Thursday Next books). Man, he's like my literary rock star!

It was also nice to see other readers of his there. I expected a lot more of the sci-fi/fantasy type, and instead there was a vast variety of people. These books appeal to so many different types, and somehow gets translated into 12 languages (he's big in Germany), it's amazing.

By the way, The Fourth Bear - even better than The Big Over Easy!

WOW ! What a nice occasion for you. He is without doubt unique.
Was it crowded there?

Wow, that was so cool. I wish I could have gone too. That guy is amazing. I loved the joke about Hades. Sounds like you had a great experience. Sounds nothing like our rushed Cranberries/No Doubt meetings. I'm still getting through Book 3. I'll get through it, I read more these past few days because I was stuck in my hotel room. :)

It was a full house, but not overwhelming. I took close to an hour after the talk to get my autographs, as I was sitting near the back. Worth the wait.

it's always awesome to meet an author you admire or appreciate in some way. it brings the pages to life and gives them a face.